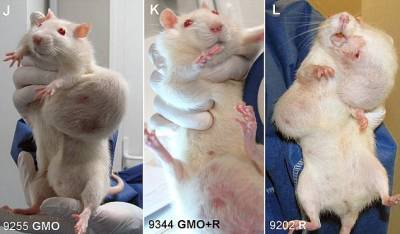 A recent peer-reviewed study (published in the Food and Chemical Toxicology Journal) has linked genetically modified foods to an increase in cancer risk in laboratory animals.  In the study, the rats fed on genetically modified corn died prematurely, many of which having tumours the size of golf balls.  50% of the males and 70% of the females died prematurely as a result of a GMO diet.  Not only did these rats have tumours, they also had damage to multiple organs including their liver and kidneys.

The rats were fed a form of genetically modified corn, engineered by a company called Monsanto, to resist a herbicide that they also sell, called Roundup.

This is the same type of corn often found in your corn-based breakfast cereal, corn tortillas and corn snack chips.

The purpose of the GMO corn being studied, was that farmers can spray their fields with the herbicide Roundup as much as they want, without killing the corn.  However, Roundup has not only been linked to DNA damage and infertility, but the researchers found that Roundup-ready corn also had similar issues.

Molecular biologist, Dr. Michael Antoniou of King’s College London School of Medicine explained that even the scientists involved in the study were shocked by the aggressive tumor development:

“This research shows an extraordinary number of tumors developing earlier and more aggressively – particularly in female animals. I am shocked by the extreme negative health impacts”.

The danger lies in the fact that you cannot genetically manipulate one factor without triggering a raft of other changes that you did not account for.  Even minor changes can have subtle effects that could be expressed over decades, as opposed to months.

In previous studies, genetically modified potatoes engineered by Monsanto were also found to have similar effects.

Jeffery Smith, author and the Executive Director of the Institute for Responsible Technology revealed:

“In the mid-90s, the UK government funded research for a scientist to figure out how to test for the safety of GMO’s. That scientist was Dr Arpad Pusztai – the world’s leading expert in his field. He worked at the top research laboratory in the UK. One of the best in the world. He had about 20 or 30 researchers working with him, in three different institutes.

The protocols that he was designing were supposed to be implemented into EU law as requirements for the safety assessments of any GMO to be introduced into Europe.

Only the rats that ate the GM potato got sick. They had potentially precancerous cell growth in their digestive tract, smaller brains, livers and testicles, partial atrophy of the liver and damaged immune systems in 10 days. What was the cause of that damage? It was not the insecticide, because the group eating the insecticide did not have those problems. It was understood that it was the process of genetic engineering itself and the unpredicted side-effects that caused this profound damage to every system and organ studied.”

“Judging by the absence of published data in peer-reviewed scientific literature, apparently no human clinical trials with GM food have ever been conducted.”

“From the results, the conclusion seems inescapable that the present crude method of genetic modification has not delivered GM crops that are predictably safe and wholesome.”

“every single independent study conducted on the impact of genetically modified food shows that it damages organs, it causes infertility, it causes immune system failure, it causes holes in the gastrointestinal tract, it causes multiple organ system failure when it is eaten.  It causes a variety of changes, some of which we cannot even guess at, as new proteins are coded for by the altered DNA.  [Changes] that we have never seen before.  We are playing with genetic fire”.

Surprisingly, the amount of safety testing necessary to bring the product to market after genetic modification is slim to none.  In fact, no human studies were required at all, and the study data Monsanto supplied involved less than 40 rats tested over just 90 days!

You may find it disturbing to discover that the FDA doesn’t have a mandatory GM food safety assessment process, and as a result has never approved a genetically modified food as being safe.

Any GM food crops that have hit the commercial market so far, have only participated in a voluntary program whereby the FDA carry out a pre-market review of the GM food, based upon the data that the manufacturer presents.  But this is not a legal requirement, and any research data does not have to be peer-reviewed or published.

In the US, developers of GM crops are legally allowed to put any GMO on the market, on the understanding that they can be held responsible for any harm to consumers that may result from it.

Many people do not realise the extent to which they are exposed to GMOs, nor how significantly altered these organisms are.  For example, wheat in the 1950s and 60s only had 12 chromosomes in its DNA, whereas now, certain strains of wheat have 42!  Humans only have 46.

Genetically modified corn makes up 86% of the US corn supply.

Genetically modified cotton makes up 93% of the US cotton supply.

There are over 170 million acres of genetically modified crops within United States because they don’t currently have to be labelled as such. These crops include maize/corn, soy beans, cotton, canola oil, sugar beets, rice, potatoes, peas and more.

In more than 50 other countries, including the UK, labelling genetically modified foods is compulsory.  However, they do not have to declare if food is from animals fed GM feed, such as meat, milk or eggs.

To be on the safe side, if you notice the letters “GM”, or “GMM” on your food labelling, do not eat it.

Even if you do not support the view that genetically modified crops are dangerous, you must consider the fact that the genetically modified plants are grown in environments where it is standard practice to use high levels of pesticides, which inevitably contaminate the plant itself.

According to Shiv Chopra Ph.D.

“These pesticides may have killed the weeds or the insects, but the product is still on the plant. Even if it is washed off, it is still within the water supply. These compounds are toxic, they cause cancer, they cause endocryne disruption which affects your hormone levels.”

So where are all the regulatory bodies who should be evaluating or putting a stop to it?

Take Michael Taylor for instance.  As of 2010, he is the current deputy commissioner for foods at the FDA.  Let’s take a look at his career history:

So Monsanto’s former attorney, Michael Taylor, was in charge of policy at the FDA when the GMO policy was created.  He then became Monsanto’s Vice President.  Under the Obama administration, he was put back in the FDA as the “US food safety Tsar”.

According to Joel Bakan, LL.M, Professor of Law, University of British Columbia, Film Director of “The Corporation.”:

In the words of Jeffery Smith, author and the Executive Director of the Institute for Responsible Technology:

“In reality, the overwhelming consensus among the scientists at the FDA were not only that GMO’s were different, but they were inherently dangerous. That they might create allergies, toxins, new diseases and nutritional problems. They had urged their superiors to require long-term study and when they saw drafts of the policy coming back to them, they were angry and urged their political appointees to change course. But Michael Taylor and his local appointees ignored the science, ignored the scientists, denied the existence of their concerns and set forth a policy that allowed GMO’s to be put on the market in a way that creates unprecedented risk for human beings and the environment.”

“Monsanto originally said that PCBs were safe.  They were [subsequently] convicted of actually poisoning the people in the town next to the PCB factory and were fined $700 million.  They told us that agent Orange was safe, they told us that DDT was safe and now they are in charge of telling us whether their own genetically modified foods are safe because the FDA does not require a single safety study. They leave it to Monsanto.”

“When genetically modified soy beans were fed to rodents, we have seen changes in the testicles, changes in the sperm cells, changes in uterus and overies, in the DNA functioning of the embryo offspring, smaller babies with a death rate that is 5 times higher compared with controls.  Sterile babies, even babies born with hair in their mouths.

This research has been done by government scientists, and scientists who were at the top of their field.”

So can you trust Monsanto?  Phil Angell, Monsanto’s Director of Corporate Communications, quoted in the New York Times, October 25, 1998 said:

“Monsanto should not have to vouchsafe the safety of biotech food. Our interest is in selling as much of it as possible. Assuring safety is the FDA’s job.”

Both France and Russia have recently banned GMO crops, so we shall soon see if other countries follow suit.

Regardless of what your government decides, in the interests of remaining cancer-free and maximising your health, the evidence suggests that you should personally avoid genetically modified ingredients in your foods.

The Seralini, et al., study has been peer-reviewed THREE times, more than any other study with such profound information. Monsanto forced the publisher to retract the article when it was first published but it was again reviewed and again published, so it stands as valid. No other information on the safety of GMO is needed. The Seralini study was for 24 months, whereas Monsanto’s data submitted to the FDA was based on its 90-day study. Where is the FDA when we need it??