Susanne Posel Occupy Corporatism December 30, 2013     Turner Radio Network (TRN) has issued a report regarding Fukushima Diachi Nuclear Plant that is expected to affect the entire Northern Hemisphere. According to the report: “Persons residing on the west coast of North America should IMMEDIATELY begin preparing for another possible onslaught of dangerous atmospheric … Read more

Susanne Posel Occupy Corporatism December 18, 2013     Studies that have recently come out claim that vitamins show no viable benefit for preventing early death, heart disease, cancer, preserve cognitive abilities and does not prevent heart attacks in large medical grade doses. Funding for these studies was provided by the National Institutes of Health … Read more

Susanne Posel Occupy Corporatism December 16, 2013     Because of Fukushima, “ experts say ocean currents are carrying the radioactive water to the West Coast.” Reports state that the San Francisco Bay area, among other areas on the West Coast, is threatened heavily by the radioactive fallout from Fukushima. In fact, the entire west … Read more

Susanne Posel Occupy Corporatism December 5, 2013     The UN International Atomic Energy Agency (IAEA) is decrying that a cargo truck carrying cobalt-60, a dangerous radioactive material, was stolen from a gas station in Mexico and must be found immediately. The equipment is medical in nature and used for radiation therapy. Richardo Maza, official … Read more

Susanne Posel Occupy Corporatism December 4, 2013     Researchers at the University of Kansas (UoK) have released a new study regarding bisphenol A (BPA) shows a link between migraines and the chemical. This report found that BPA causes debilitating headaches in 1 out of 7 persons who ingest the contaminant. Those who react to … Read more

Susanne Posel Occupy Corporatism November 27, 2013     The Food and Drug Administration (FDA) is warning US citizens about acrylamide (ACL), a chemical that is recognized as a known carcinogen. ACL forms in baked and fried foods such as: • Potatoes • Cookies • Cereals • Coffee • Crackers • Breads • Dried fruits … Read more

Mikael Thalen Infowars.com November 3, 2013 During Saturday’s “A Healthy You & Carol Alt,” a new half-hour Fox News show covering health and wellness, organic health commentator Max Goldberg joined the program to break down what may be one of the most hard-hitting GMO reports ever aired by the mainstream media. “No long-term studies have ever been done on humans, but when you look at the studies that have been done on animals, it’s pretty appalling,” Goldberg said. “You’re talking about liver damage and kidney damage and when they fed it to hamsters, the third generation of hamsters weren’t […] 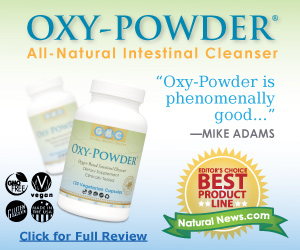 (NaturalNews) Don’t look now, but the federal Leviathan thinks all raw almonds – including those grown organically – are so dangerous for you, they should be cooked, even if it means using a known carcinogen. According to the Alliance for Natural Health , the state of California’s Almond Board, in conjunction with the U.S. Department of Agriculture , proposed an industry-wide “mandatory sterilization” rule in 2007 requiring all almonds, even those grown organically, to be pasteurized, in response to a string of salmonella outbreaks in 2001 and 2004 (as compared to, say, a rash of deaths caused by prescription […]

Revlon, one of the largest cosmetic companies in the country, known for their supportive stance in breast cancer research, is talking the talk but not walking the walk. A survey put out by the Campaign for Safe Cosmetics uncovered the startling news that the cosmetic… Related PostsCan Avocados Prevent Cancer? Insulin Potentiation / Insulin Potentiated Chemotherapy … Read more

Case Adams Activist Post Researchers may have solved a vexing mystery as to why parabens contamination in humans has been so pervasive in recent studies: Parabens are increasingly contaminating our food supply. Researchers from the New York State Department of Health and the Department of Environmental Health Sciences, along with the University of New York at Albany have determined in a study of foods purchased from local markets that much of the U.S. food supply is contaminated with parabens – a group of chemicals thought previously to produce exposure in humans through the skin in cosmetics and lotions containing […]

A recent peer-reviewed study (published in the Food and Chemical Toxicology Journal) has linked genetically modified foods to an increase in cancer risk in laboratory animals.  In the study, the rats fed on genetically modified corn died prematurely, many of which having tumours the size of golf balls.  50% of the males and 70% of … Read more

Aluminium salts (aluminum salts) are the active antiperspirant ingredient used in many underarm deodorants. Mainstream cancer research organisations claim that there is no link between these antiperspirants and breast cancer.  However, recent studies indicate otherwise. Aluminium-based antiperspirants work by blocking the pores of your underarms, preventing the release of sweat.  However, this also blocks the … Read more

Ever wondered how to reduce your risk of cancer?  In addition to our nutrition and cancer prevention section, you should take a look at the following articles, which highlight the top things you should avoid to reduce your cancer risk: Related PostsKale – An Anti-Cancer Food Ginger Root And The Prevention Of Cancer Can Figs … Read more

Below is a list of articles highlighting what you can do to reduce your cancer risk.  You may also wish to visit our cancer prevention section, which covers many cancer-fighting foods: Related PostsThe Health Benefits of Chocolate Cheese And Your Cancer Risk Bananas And Cancer Prevention How Asparagus Could Help Prevent Cancer Could Blueberries Help … Read more